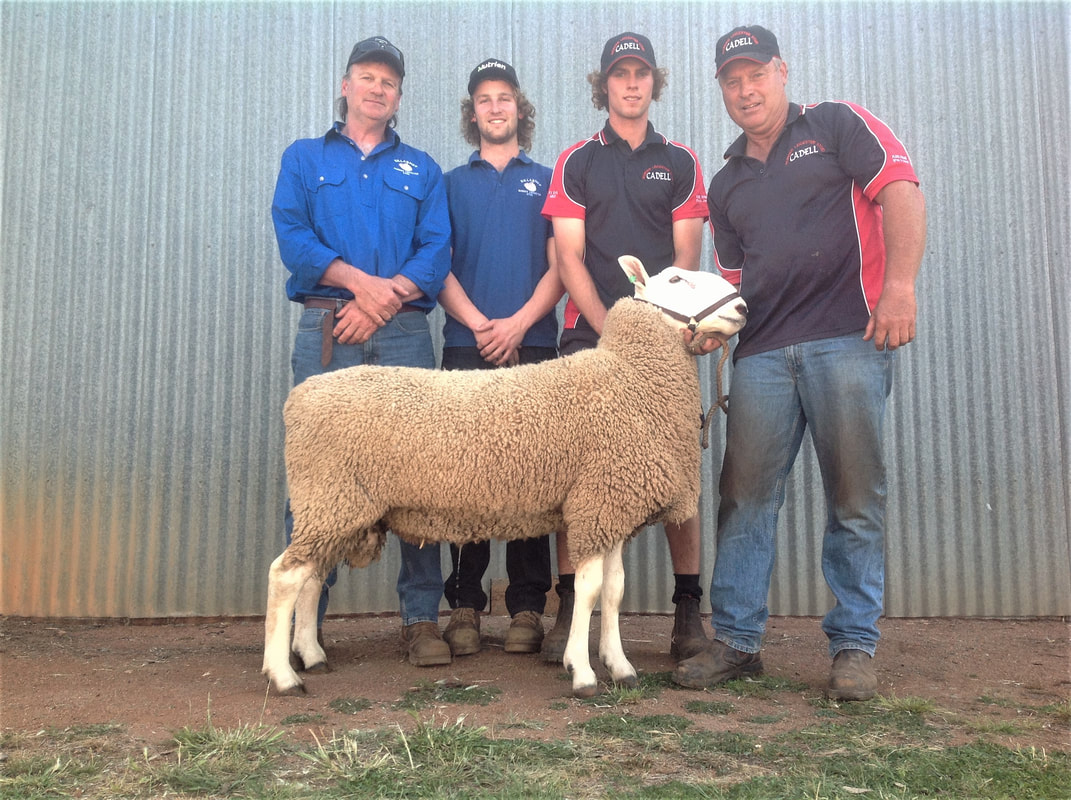 Equal top priced ram (Will & Bill Stanley)
Bidding was furious when 217 rams were offered at the 45th annual sale by the Harper family, Cadell Border Leicester stud, Ariah Park, last Friday.
The Cadell stud is in its 74th year having been established by the late Ray Harper in 1946 and is now run by his son Barry, grandson Robert and great grandson Blake.

They join approximately 800 ewes each year, making it the largest Border Leicester stud in the country which keeps individual pedigrees and Lambplan figures.

Top price was $5500 paid twice, while there was a total clearance of the catalogue for a $2916 average price.
Bill and Will Stanley, Killarney Border Leicester stud, Galong purchased their pick of the offering for his correct structure and length of body.
"He has plenty of stretch," Will Stanley said.

"He stands well, has a nice clean head and is very good from behind."
The son of Cadell Pride 23rd, recorded the following Lambplan measurements: 9.61 yearling weight, 0.26 yearling fat and 125.11 Maternal $. The other equal top-priced ram was bought by Noel Pengilly, Glenleigh Pastoral Co, Eugowra. Mr Pengilly was attracted to his choice for the style and shape of the potential top sire.
"He ticked all my boxes," he said.

Volume buyers were certainly very active and were consistent in their selections and included Harper Trading, Lockhart who put a draft of 23 rams together to top of $3500 and average price of $3056, A.M and C.G Gadsby, Euchareena who selected 14 rams for a $3046 average price and C.P Harper, Ariah Park who added 12 new sires to his flock for a $2783 average.

The Durnan family at Frying Pan Creek, Narrandera had recently sold 397 March/April '20 drop, August-shorn ewes sired by Cadell Border Leicester rams for $320 at the spring first-cross ewe sale in Narrandera. They purchased 13 rams for an average of $2692.
Other buyers who selected large drafts included Carson Family Trust, Dirranbandi, Qld who took 10 home for a $3040 average price, W.H, N.C, B.M and M.D Rollins, Coolamon who bought 12 rams for a $2700 average price and N.N, L.B and P.M Wilson, Ungarie who returned to buy 17 new sires for a $3212 average price.

Stud co-principal Barry Harper said it was the best sale he had seen in 45 years of on-property auctions.
"There is a lot of confidence which is good for anyone with sheep," he said.
"The sale today was a real indication of the buoyancy of the entire sheep industry.
"We have low numbers across the board, and with a good season and good product prices today's sale reflects the determination of producers to buy quality stock."
​
The sale was settled by Elders, Wagga Wagga with Joe Wilks (Elders) and Peter Cabot (Nutrien) sharing auctioneering.